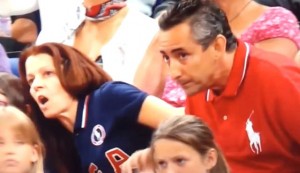 Amidst all the splashing, dribbling, and leaping of this summer’s Olympics, one of the most memorable spectator sports involved Aly Raisman’s parents bobbing and weaving with every move their daughter made in her high-flying gymnastic pursuits. As a kid, I imagined what it might be like to flip and run like Olympians did, but as a (much less physically adept) adult, I identified with those parents. I felt the tension as they watched their daughters’ years of training be put to the test and I channeled their emotions with each result.

I also ran a script in my mind of the conflicting thoughts they must have had:

“Is my child feeling too nervous? Is she proud of what she’s accomplishing?”

“All that damn money and years of support had better have been worth it.”

There really is no way around this double-edged sword of a parent’s perspective. Try as we might to separate ourselves from our child’s endeavors, to be selfless, we have a lot invested. As such, it’s easy to get caught between what’s in it for our kids and what’s in it for us.

For parents, having children involved in sports — or any other extra-curricular endeavor that sucks up time like an industrial sponge — means serious parental sacrifice. You must shuttle them everywhere, sit there while they practice, and make sure it all works within the family’s schedule.

Somehow, my wife and I have navigated through a multitude of after-school athletics for our three boys. It’s often worn us out, but we’ve wanted them to try everything, to love sports and know how to play them for the benefit of their bodies, minds, and sociability. And, for me, I’ve enjoyed seeing my flesh and blood achieve on the playing fields.

But my perspective took on a new level of clarity a year ago, when our nine year old was recommended to join a competitive gymnastics team. For his part, Jacob was happy to be recognized for his accomplishment after months of hard work and we were pleased for him. Who wouldn’t be proud of their kid’s achievement?

Well, there was something else. There were our own feelings of how an ambitious team commitment would affect Jacob’s daily life and, yes, our lives. As two parents with full-time jobs and two other children to care for, this would have a domino effect on everyone.

So we went to a team orientation where more experienced parents explained that practices included two three-hour practices on weekdays and full-Saturday workouts. For meets, the time chunk would balloon and there would be travel throughout the year to places all over the region and, depending on how the team fared, to various parts of the country. If Jacob were to do well enough, he was looking at an even more rigorous regime in the years to come.

Wendy and I went home from that meeting with a sinking feeling. We just couldn’t imagine managing that kind of schedule. Also, we weren’t sure we wanted our son to endure so much competitive pressure in the pursuit of medals and the dim possibility of collegiate or Olympic glory. Further research revealed that the pounding his body would take often results in injuries, some of which could permanently affect him.

We went to our son and asked him, “Do you really want this?”

“I don’t know,” he said, a little anxiously.

We then explained our concerns, though we pledged that if it was something he strongly desired, we would find a way to make it work.

“Would I still be able to have dinner and go on vacations with the family?” he asked.

We were honest: “Probably not as often as we do now.”

I have to admit I was tempted to sign him up, not just for him but for my dream of seeing my kid win medals. But the decision came down to the meaning behind our son’s primary questions.

Jacob has since gone on to play soccer, flag football, and run track. He says, now, he’d like to do gymnastics sometime, but not with a team. He wants to do it for fun.

No matter what we parents want for our children when they engage in sports, it has to be about enjoyment, above all else. Sure, one day, these athletic experiences may help our children compete better in all aspects of life and it may aid them in being excellent teammates and co-workers. But, unless it’s something a child has a singular passion for, no sport is worth giving up a balanced life of family, friends, school, and other hobbies. And it certainly isn’t worth it for the sake of a parent’s own sense of self worth.

Focusing on the kids’ joy and balance. Now those are things really worth cheering about.