The Brass Tacks of Music Education 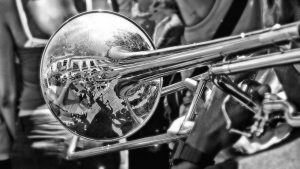 When my eldest son came home one day during his first week of third grade, he lugged in a sinister-looking black case. My immediate reaction was that he had joined the elementary school mafia and was about to make us an offer we could not refuse after making him transfer to this new school. The reality was a bit more surprising. Our quiet, seemingly risk-averse son had brought home a trumpet.

“How did this happen?” I asked Benjamin.

“They asked if anyone wanted to join the orchestra, and I said yes,” he said with a shrug.

It was that simple. He had never discussed interest in playing the horn before and, because he previously took piano lessons without much commitment, we assumed music was not his thing.

That was OK. I was thrilled enough for the both of us. Having spent much of my adult life regretting that I had given up piano as a teen and then devoting 30 years to idolizing musicians and writing album reviews, this moment was celebratory. My sons would play music.

Over the next three years, Benjamin practiced with a ragtag orchestra of kids, most of whom had never played an instrument before. However, their teacher, Mr. Geiger, steadily and expertly trained them so they got pretty darn good. Maybe some parents dread the warbly, sometimes out-of-tune seasonal concerts, but my face hurt from all the smiling I did while listening to Benjamin play in the brass section.

Our middle son was a little more intentional when it came time for him to choose whether or not to join the school orchestra.

“I’m going to be better than Benjamin,” he said, never shy about his competitive spirit.

Yet, when he came home with his own black case, this one contained a clarinet.

“Why not the trumpet?” I asked.

“Dad, I’m my own person and the clarinet is more me,” he reasoned.

Jacob performed with gusto and enjoyed being one of only two to play the instrument in the group. He didn’t practice much, but he made the most of the rehearsals and his flair for pouring his outgoing personality into the reed instrument.

Then Ari’s turn arrived. Like his brothers before him, our third child selected his own instrument, the trombone. Seriously, that thing was taller than my tyke, yet my boy was determined to master it. Of all my sons, Ari showed the most joy in playing, even though it proved a challenge to get skilled enough to blow the notes the way he wanted to. Often, he’d get frustrated.

“I’m really not any good,” he would sometimes say.

I could have told him that the sounds he was creating were akin to those generated by a flatulent walrus. However, his drive to improve focused my encouragement of him. If he wanted to get good, I would not dampen his spirit. Even if it meant going to another room to rehabilitate my ears.

And keep playing he did, month after month. He got to the point of more proudly pulling the instrument out to show off his version of “When the Saints Come Marching In” and “Winter Wonderland.” And no kid waved more excitedly when we would see him in the back row of the orchestra on performance days.

While Benjamin petered out on music by sixth grade and Jacob took up the guitar on and off for the years past elementary school, Ari kept going. In the first year of middle school, he joined the beginning orchestra with which his skills really began to take flight. Much of this had to do with an attentive teacher who always found extra time for his large array of students. It is also attributed to Ari’s outside-of-school lessons with a patient and creative piano teacher and a marvelous trombone teacher. This brass instructor nurtured not only Ari’s playing, but helped him to transcribe music by ear and explore the classics of my own true musical love, jazz.

Recently, Ari emerged from a trombone lesson saying he wanted me to select one of my favorite jazz tunes each week or so for him to learn. To say that I got a little dizzy from the extra oxygen that request filled me with is not an exaggeration.

As this new school year rolls forward, I remain committed to the extra dollars and driving time it takes to give Ari as much music education as he wants. My wife and I may have led our children to the water of music, but it has been their own curiosity and willingness to take risks with their creativity that has given them a means of extra expression and an enduring love of music’s affective powers.

If I have advice for parents on this subject it is that, whatever your own musical interest is, make the effort to expose your children to playing music early and then support their pursuits to the utmost of your resources. You never know what will happen. Likely, it will be something beautiful. 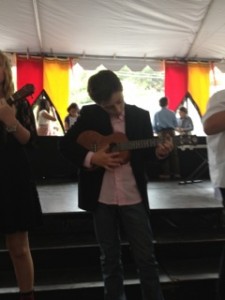