A bunch of television outlets are getting into the fatherhood business with sitcoms (even I wrote a pilot script for one), but A&E has opted to bring actual dads to the screen with a new reality TV series called Modern Dads. The show, which premieres on Wednesday, August 21, at 10:30/9:30C, features a creative, high-energy group of Austin, Texas-based stay-at-home dads and their kids.

First, there’s the giveaway. All you have to do is be the first dad to email me at gregory@familymanonline.com to tell me you want the Modern Dads pack and you will win: an A&E mug, tool belt, wipes, antibacterial gel, stain remover stick, wash cloth, baby spoon, and a $25 gift card to Toys R’ Us! Please include a mailing address to which A&E will send the prize pack.

Second, there’s the contest for creating the best “Dadget” that shows a way you’ve made parenting easier. Submit a photo of the “Dadget” and you could win a $1,000 gift card to be used to fulfill your gadget invention! Enter on Facebook by uploading your photo in the “Submit an Entry” section, or by posting a photo on Instagram or Twitter tagged with #DADGET.

For more about being a modern dad, please read Big Babies. 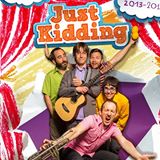