I had an amazing time working once again with director David Guest from Life of Dad for an installment of their Dads Doing Good video series, sponsored by Honda. In this video, we transported a bunch of materials and equipment in two spiffy Honda Odysseys to a baseball field in Hawthorne, California. There, David, contractor Ken Pepper, and a bunch of dedicated coaches/dads went to work improving a Little League Baseball field. Along with help from the kids at the Holly Park Little League and a film crew (including my own 15 year old son), we spent the day refurbishing a backstop, painting and putting up safety boards along the bottom of the fences, and installing a new pitching mound and pitcher’s rubber. We also presented the hard-working kids with new bats, balls, and helmets. What was especially impactful was getting to know the number of league coaches, who talked about giving back to their community as fathers and role models as they teach the kids to pitch, hit, throw, catch, and run. The video below tells the rest of the story in ways words just can’t convey. Special thanks for Tom Riles and his crew at Life of Dad for including me on this project.

Dads Serenade Us With “A Whole New World”

In preparation for Father’s Day, we have a new funny dad music video as those brave souls at Life of Dad give us a cavalcade of paternal types singing Alladin’s “A Whole New World.” Come on, you know you want to sing along…

To honor the heart surgeons, doctors, and nurses, that saved their babies who were born with congenital heart defects (CHDs), Life of Dad’s Tom Riles (the first dad with his daughter in the video) and friends present dads singing “Somewhere Over the Rainbow.” This is genuine, unfiltered inspiration.

‘My Life of Dad’ Dad Video Series Kicks Off

LifeOfDad.com, run by those fun and funny dudes who’ve brought you so many comic looks at fatherhood and so much opportunity to virtually bond with other dads, has a new video series called “My Life of Dad.” The premiere dad video interview is with the gutsy forward of one of the NBA’s current top teams, the L.A. Clippers’ Caron Butler. Kudos to director David Guest, producer Tom Riles, and the rest of the crew for giving us this window into a dedicated dad of five who just happens to star for Lob City, too.

Dads Croon Mariah Carey’s “All I Want for Christmas”

Following their cover of the Little Mermaid’s “Part of Your World,” the gents at LifeOfDad.com recorded this version of Mariah Carey’s holiday chestnut, “All I Want for Christmas.” Everyone from Marines to a pop in footsie PJs unabashedly warble along in this dad music video.

Tom Riles Asks Kids – What Are You Thankful For?

Tom Riles, dad, comic, filmmaker, and founder of LifeOfDad.com, asks kindergartners: what are you thankful for?. This Thanksgiving, try turning the video camera (or iPhone) on your kids and ask them they’re thoughts. Hopefully the words, “I am thankful for my amazing, selfless parents” will come up. 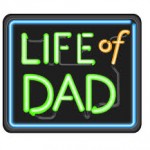