Halloween is for Kids, Right? 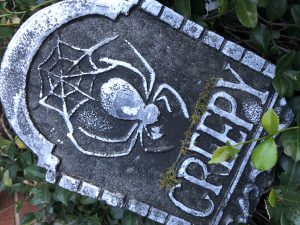 A dozen years ago, when my sons were younger, I had a lesson to learn about All Hallow’s Eve. Up till then, I really thought I could construct the perfect trick-or-treat night. On that October 31st, I stepped into the night, ready to lead my brood through one of childhood’s greatest experiences – an evening of stockpiling candy and pretending to be a favorite character. For me, it was a chance to have as much fun as they did.

I even dressed up as Luke Skywalker, wearing a robe and carrying a toy lightsaber, though I didn’t look as adorable as my kids. Jacob (then 4 years old) dressed as Harry Potter. Benjamin (then 7) went for the medieval ‘dark warrior’ look. Ari (then 11 months) was stuffed in a puffy lion’s costume for his Halloween premiere.

As I watched my older sons ring doorbells and say thank you in voices as sweet as the treats they received, it was perfectly enchanting – for all of 15 minutes.

A car blaring bass-driven music slowed in front of us. A teenager in a Scream mask yelled out, “Happy Halloween!” then chucked an egg that smacked my pant leg.

My children thought it was hysterical.

“Daddy got hit with an egg! Can we go get some eggs, too?”

“No,” I shouted, before realizing I was cracking myself. “It’s only funny once.”

As we moved along, my wife commented, “The real Luke would’ve dodged that egg.”

I glared at her, then spied Jacob returning from a house, his mouth bulging with chocolate, ready to open a king-size Snickers.

“Only five candies while we walk,” I warned him.

That’s when my little Harry Potter quick-changed from British schoolboy to spoiled brat: “I don’t LIKE you!” he cried, dropping to the sidewalk.

I controlled my temper, firmly telling Jacob, “I can take you home right now.”

Apparently this worked because he hugged me, saying, “I’ll share some of the SweeTarts with you later, Daddy. I know you love them.”

With order restored, I pushed Ari along in the stroller, smiling as he pointed at the festive decorations of flying witches, fluttering ghosts – bloody body parts strewn over someone’s lawn.

I tried to ignore him, thinking, what could be better than going house-to-house with your family, collecting treats Charlie Brown only dreamed about?

“This is really boring,” Benjamin repeated.

“Look, guys, this house has a hundred cool pumpkins!” I said like a cheerleader. “This one is mean, this one is silly, and this one looks like Mommy without her makeup.”

Neither my wife nor my eldest son appreciated that one.

I looked at my wife, dejectedly. “This is supposed to be a family night.”

Benjamin ran off and we visited more houses, but I kept feeling let down without him. Then I realized Jacob had slipped away, too. I ran up and down the block before spotting him hiding behind a bush, about to eat an unwrapped popcorn ball.

“Don’t — eat — that!” I shouted as I swatted away the sticky clump like it was some kind of grenade.

Jacob wailed in shock while I explained, “Didn’t we tell you not to eat anything that isn’t in a package?”

I leaned down to hug away his tears just as Ari, no longer content to be a live-action Simba the Lion King, pulled off his cloth mane for the seventh time and howled crankily.

Seeing my perfect Halloween unravel, I sulked like one of my children, “But I want to trick-or-treat TOGETHER!”

My wife placed her hand on my cheek: “You need to grow up.”

Later, my family reconvened at home, munching on more candies and answering the door for other trick-or-treaters. My childish desire to be one of the kids slowly faded, especially in light of seeing Jacob handing out sweets to the visitors.

“Here’s one for you Cinderella, one for you Spider-Man,” he said before a much larger person came up, clearly an adult in a grotesque mask. Without a beat, Jacob said, “And here’s three candies for you, Scary-Face Man.”

Imagine, a grown-up trying to steal some of the fun on a kids’ night. Well, there’s always next year.

Author/marriage and family therapist/researcher Michael Gurian has written a number of books with the word “wonder” in the title. This is partly because he has an endless curiosity about the complexities of human beings and living in the modern world. In particular, he, along with his colleagues at the Gurian Institute, has reached into the intricacies of science as it relates to gender and produced such bestselling books as The Wonder of Boys, The Wonder of Girls, Boys and Girls Learn Differently, and Leadership and the Sexes. These guides have helped countless parents and educators understand children and help them navigate growing up.

With his newest book, The Wonder of Aging: A New Approach to Embracing Life After Fifty, Michael Gurian trains his considerable research and analytical skills on people who have already grown up, yet continue to develop in ways often over-looked by society. Especially because we are fortunate enough to be able to live longer, Gurian’s book takes on greater significance as he addresses such topics as community building, stress reduction, illness, sexual intimacy, and death. What makes the author so effective, here, is his constructive, positive approach and down-to-earth tone on the topic of aging. This is the kind of book worth reading for anyone, even before hitting 50, who wants to better comprehend his/her own changing life in order to live it with less fear and more fullness.