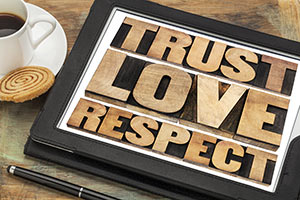 Throughout my schooling, it wasn’t English or History that stumped me. It was girls. There was my second-grade test in flirting that ended with a classmate bashing me over the head with her very fashionable purse. This was followed by years of cluelessness that led to a high-school dating career marred by an uncanny ability to misread social cues, resulting in one common response: “I just like you as a friend.”

As evidenced by my improbably long-running success with the woman who agreed to marry me, I guess I figured a few things out. But the road to my wife was full of misunderstanding and miscommunication that could have been helped by better education than that provided by my Beavis- and Butthead-like friends, the macho stereotypes on TV, or the ultra-suave characters on the big screen. I was indeed blessed with parents who taught me the value of respect toward the opposite sex, but they gave me precious few insights into the intricacies of socializing with the ladies. And even in the heightened hormone hell of high school, teachers and administrators had precious little to say about gender issues save for the basic anatomical information in Health class.

Being a parent in today’s world presents some very stark reasons why raising a boy requires a lot more focus and intentionality than the methods of previous generations. The subject of male interaction with females is one of particular concern as evidenced by ugly and aggressive actions by young men towards women on college campuses, among other places, but the fact that it happens in college means that something is missing in the education – both formal and informal — of our boys. Somewhere along the line, a percentage of our young males has opted for instinctive displays of physical dominance instead of rationalized communication in order to get what they want from women. And there is support for this physical behavior by a number of parents and other people who should know better.

While disturbing behavior by boys in college requires a worthy and in-depth discussion, one path of contemplation is about what we parents might do to instill the deepest thinking and reinforce the healthiest behavior in our guys early on. As a father of three dudes who are quite distinct from one another, I have learned as much from them as I have taught them about sex, growing into manhood, and how to treat girls in social and more intimate situations. I’ve discussed these topics with them in a variety of situations, with varying degrees of success.

Recently, my wife and I talked to our youngest son, age 11, who was part of an elementary-school guy clique that saw girls as alien creatures who had no business on the fellas’ planet. On occasion, we’d ask Ari if he ever chatted with girls, and he’d say that one was bossy or another was nice. Our goal was to make sure that he was being polite, even if females were not part of his inner circle.

Beyond his boy band, Ari has benefited from a different perspective, as he is close with a girl he’s grown up with. They were at overnight camp together this past summer and the counselors told us that other kids had been making fun of them for being boyfriend and girlfriend. So, we asked our boy about it.

“I don’t remember anyone making fun of us,” he said, with a hint of a white lie.

“How would it make you feel if someone did give you a hard time about it?” my wife asked.

For Ari, his view of girls changes with the situation, but he has made it clear that friendship is friendship, no matter the gender. Friendship, and the equality that comes with it, is the root of what we encourage Ari to continue, especially with the coming storm of adolescence. While there is nothing wrong with the instincts that many boys have about girls being different from them in various ways, problems emerge when boys see girls as something less than them — when they view girls as inferior athletes, lesser students, or more fragile than guys are. Our boys need us, as parents, to educate them about all the goals girls can kick, the math problems they can solve, and the emotional ups and downs they can endure. More than that, our boys require us to help them see that their own weaknesses can be strengthened by healthy interactions with girls rather than activities in which boys try to dominate their counterparts.

Some may think these points of education are obvious or out-of-date, given the progress our society has made in gender equality. But this is where it’s important to bring back the issue of what has been happening on college campuses and beyond. There remains a lingering, sometimes intense current of male disrespect toward females that shows up in even the most seemingly progressive places. We have seen it in the case of the Stanford swimmer who attacked an unconscious girl after a party, and the mindless coddling of that attacker in terms of his light sentence. We have seen it in the professional athletes who have injured (or worse) their spouses, then received little consequence. In one case, a baseball player who had abused his wife received an ovation after returning to the field. Absolutely, we should allow that aggressors can make amends, but what does it say to our children, particularly to our boys, when we applaud athletes while not talking with our kids about the mistakes these men made as human beings?

As parents, we must discuss the tough stuff, sparing details for our youngest children, but at least broaching the big issues of fair treatment of girls and women. We should also ask our children to help girls who are being poorly treated, as the young man did who interrupted the sexual assault by the dumpster, resulting in the swimmer’s arrest. We must tell our boys to be watchful and active if male friends act improperly, and to never be afraid to break the bro code if they know something to be wrong.

Perhaps most important is the role modeling we adults do. In our relationships with women, be they in partnerships, friendships or casual acquaintances, we have to show our boys we respect women physically, verbally, psychologically and professionally. We have to illustrate how we talk things out and resolve conflicts with adult women and encourage our daughters and friends’ daughters in pursuits that are equal those of boys.

Among the other resources we can use are older children, be they our own kids or those of close friends. Ari is fortunate to have two older brothers, one who is starting high school and one who is beginning college. Both boys have been on the receiving end of parental talks about what they could do better and what they did right in their interactions with girls. They have also experienced a range of peers, from the most exemplary to some who have behaved questionably around the opposite sex. As a result, they have shown their little brother how to be friends with girls and how to act around girlfriends. They are the role models Ari has most closely watched, which emphasizes why we had to address issues early in our parenting career.

I am still teaching my boys about the keys to respecting the opposite sex. Frankly, I will keep talking to them about it because there are powerful forces out there that push guys to react to their basest instincts. Good guys can make mistakes, but with emotional honesty, lots of talking and ample role modeling, we can help our sons be the honorable counterparts to all the great daughters out there. That’s education with more value than any diploma can provide.