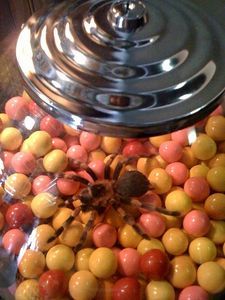 During my tenure as a dad, I’ve weathered enough horrors to rival anything the architects of Halloween could imagine. The middle-of-the night variety of nightmares has been enough to keep my heart racing just recalling it. Nothing rattles you like being startled by a wife who says, “Go check on the baby, I don’t think he’s breathing” or having a five-year-old exhaling on your sleeping face like an ax-murderer before announcing, “Can I cuddle with you guys?” Then, there have been the screeching cats I’ve stepped on while stumbling for 3am baby bottles and the Exorcist-style upchuck projecting from otherwise angelic children at the stroke of midnight.

As I’ve grown as a parent, my boys’ travails have given me frights that chilled me to the bone. The first time I couldn’t get a return phone call or text from my eldest when he drove to a friends’ house sent images of mayhem and destruction I wouldn’t wish on anyone’s imagination. When my middle son’s face was mauled by a dog, I thought I was somehow the monster for not having been there to prevent it.

For all my horrors, they pale in comparison to the ones my children have endured themselves, especially because they lack the life experience to know how they will get through challenges that range from social pressure to emotional catastrophe. While they know they have my wife and me to support them, their quest for independence has often pushed us away. In most cases, it is best to let them suffer scares alone, since they have to develop inner resources, but heaven knows it pains me to see them in pain.

Recently, my youngest child started middle school. As our third, he has been “the baby,” the one we’ve trusted to stay young and carefree. However, sixth grade has changed that forever. He’s forsaken the hairstyles that kept his cotton-ball hair wild in favor of a close-cropped, edgier look so no one will tease him for appearing too young. Although that makes me sad since those curls had been part of his identity since he was born, Ari’s leap into the shark-infested waters of adolescent fashion has gone further.

One weekend, he and I weeded out shirts he no longer would wear. With conviction, he stuffed a bag full of too-small clothes and anything with superheroes or seemingly playful graphics.

“Wait, you won’t wear Spider-Man anymore?” I asked, thinking the Marvel hero had to be cool enough for sixth grade.

I nodded and continued packing with him, yet stopped again when he tossed a tee with a Minecraft parody on it that I bought him just a few months ago. Had he changed his taste that quickly?

“This shirt is funny,” I insisted. “And Minecraft is for grown-ups, too.”

Ari grimaced, suddenly looking older than I am. “There are these bullies in the bathrooms who make fun of you if you wear childish clothes.”

Hearing this, my blood boiled.

“What? Do they threaten you?”

“I do worry. Has anyone hurt you? Or your friends?”

“No. I just don’t go in the bathroom during nutrition or lunch.”

Visions of Mark Wahlberg taking revenge on teen punks flashed in my mind.

“That’s not right. I think I should let the school know.”

At this point, Ari looked at me with a mix of wisdom and steely resolve that he must have acquired overnight.

“It’s OK. I know how to handle this. I just can’t wear these kind of t-shirts.”

Something on my face clearly affected Ari as he held the shirt in his fist. He softened, and put it back in his drawer.

“I’ll wear it on weekends.”

It’s been a couple of weeks since that talk, but not a day has gone by without my thinking about what might be going on in the school bathroom or halls. What would I do if my child did get beaten up or merely intimidated into running away to hide? How does he really feel inside? Does he feel inferior to these jerks? What can I do to boost his pride and bravery?

The truth is that these are my fears, my visions of what middle-school horror is. On Ari’s part, he seems more interested in talking on the phone with his new “squad” (the word he uses) of friends and making sure his teachers see him working hard. I’ve asked him a couple of times about the bullies and he tells me to stop asking him about it.  So I’ve stopped inquiring, even though I still fret over might happen.

What seems to matter is that my youngest boy, much as my older two who seemed to have more influence than I do, has taken ownership of at least some of his fears. I have to let him conquer the demons on his own, barring a raising of the stakes, of course. In this way, he gets to be the hero who defeats the villains and monsters that might plague him.

As for me, I’m sure to have plenty of other nightmares, mostly the result of my own over-heated imagination. And while I miss some of the frights associated with having to be the savior for little kids, I take a bit of pride that my children both want to and are capable of feeling their own way through the dark.