Fids and Kamily Award Winners for 2013 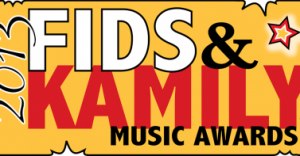 Now in its 8th year, the Fids and Kamily poll has announced its award winners for 2013. Justin Roberts and his Recess album took the top prize, followed by the latest work by Frances England and Alastair Moock. Once again, I was honored to join the group of children’s music reviewers whose votes were counted to make the list. One of the cool additions to this year’s poll is a rundown of first-time family music makers, including Cat Doorman Thank you, Stefan Shepherd of Zooglobble for having me along for this musical ride.