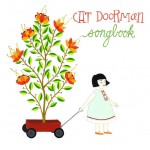 The new year is already rich with musical goodness, as these children’s music reviews attest. On the debut children’s album from Julianna Bright, Cat Doorman Songbook, Bright’s voice has the fluid ease of Mary Travers (of Peter, Paul and Mary) and a gorgeous sense of imagery as evidenced by songs such as “All the Birds” (“…all the trees are blowing in the breeze only to lean closer to you”) and “Turn Around” (…”Let the meter move us, turn us, take us up and ever make us new”). Bright sings with the whimsy shown in the illustrations she made for her album on “Peaceful,” channels Tori Amos for the piano blues tune “Madame Claire,” and sings over a ukelele on “Let’s Get Dressed Up.” This is quite a beautiful first effort from the Portland-based artist. 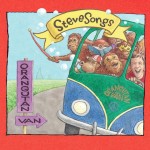 Boosted by his energetic and giggle-inducing tunes on the 2006 release Marvelous Day, Steve “SteveSongs” Roslonek earned a role as “Mr. Steve,” a co-host for PBS Kids. His latest effort, Orangutan Van, is an even better collection of songs for preschool to elementary-school-aged kids. It all starts with the interplay Steve has with his alter-ego puppet, “Silly,” on the alphabet song “‘A” is for Silly.'” The groove-fueled “All in This Together” reflects the inspiration Roslonek draws from Martin Luther King, Jr.” And “Soaring With Reading” motivates young ones to delve into the imaginative landscape of books. With a theatrical flair, sharp musical arrangements, and lots of humor, the recording shines.

Speaking of shining, the sparkle from Ella Jenkins is as bright as ever as she continues to deliver meaningful music to kids. Now 88 years old, her wisdom about what makes children move and learn is parallel with her passion on a Smithsonian collection of 15 classic Jenkins songs. Get Moving features “Hello,” “Who Fed the Chickens,” and “Play Your Instruments.” Accompanying the CD package is a fascinating explanation of the movement and education theories behind Jenkins’ work.

A couple of other nifty listening choices are the mini-album from Papa Crow, What Was That Sound?. This blows most EP’s away with its theme of, well, farting. It’s funny and more pleasantly musically fragrant than your average flower-themed album. And, last but not least is the maiden voyage of Brooklyn-based Tim and the Space Cadets. Anthems for Adventure’s highlights include the two-part tune, “The Anthem” and the Sirius/XM Kids hit “Superhero.”