April showers us with several refreshing new albums for this month’s children’s music reviews. We begin with a group whose name gives me the creeps, but whose music keeps me coming back for more. Despite its low-lying monicker, Ratboy Jr., comprised of Hudson Valley residents Timmy Sutton (vocals, guitars, and more) and Matty Senzatimore (drums, vocals, keys, etc.), offers a pretty heroic blend of rock with a slight punk edge on Champions of the Universe. Produced by Dean Jones (this Dog on Fleas frontman is a kids’ music hero, himself), the best giggle-inducing and roots rockin’ tracks include “High 5 Your Shadow,” “Where Do Monsters Go?,” and “Guitar Pickin’ Chicken.” 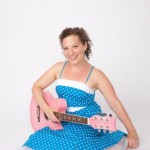 Miss Nina (Nina Stone) enlivens her Sha Do Be Doop recording with songs that range from hip-hop to pop. Among the more outstanding selections are the ones inspired by classic children’s books, including “How Do Dinosaurs Say Goodnight,” “The Brown Bear Rap,” and “Wild Things” (the latter based on Maurice Sendak’s Where the Wild Things Are.) Trained in dance and music, Miss Nina is also a music educator who applies her know-how to deepen the effectiveness of the songs, here, that make young kids want to sing and dance.

Among the month’s other worthy CDs are Latin Dreamland, Putumayo Kids’ latest release, which features the consistently superb selection of songs of various artists, this time from such countries as Argentina, Brazil, and Colombia. And, the folks from Recess Music give us Share, the newest in The Best Foot Forward Series, which has 15 tracks to celebrate sharing. The all-star contributors to this record include Rene & Jeremy, Dog on Fleas, and Charity and the JAMBand.