Words for My Father 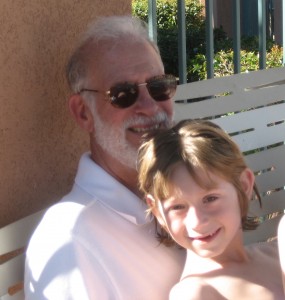 Today would have been my father’s 75th birthday. We had been planning to celebrate it for months and months prior to this date, July 12, 2014. Cancer had other plans, and it took him away from us on February 9 of this year, following a diagnosis less than four months earlier.

After my dad’s death, I took a hiatus from this Web site, partly in keeping with the advice he often gave me to try to slow down a bit more to gather in the details of life. But, on this day when it’s so very hard to be without him, I want to recognize the meaning he had for me in some fashion that feels right. Below is a version of the eulogy I gave at Dad’s funeral. It was surreal to be speaking about him in past tense when I said the words in front of the hundreds who came out to honor him that day. It still doesn’t feel quite real — and yet it is. Grieving is a long process, but remembering is forever, especially when it involves a man such as my father.

There are many reasons why I write. A number of them are because of my father. Dad, the man of science, was also a man of poetry. He wrote of moments and emotions in loving phrases to his luminous wife Franny and he etched in ink words of praise and vivid observation to all his children. He even wrote a children’s story about “Rollo,” a ball who learned to keep moving if he wanted to enjoy the world around him.

At times, I struggled to talk to my dad. There was the divorce, which took him away from daily opportunities to converse and he was needed by tens of thousands of patients over a 45-year career. Sometimes, I felt I couldn’t get enough of him. I certainly couldn’t get enough of him on the phone. My sister Kim can attest to my father’s dislike of the phone — often exhausted by work calls, Dad treated the receiver like it was one of Maxwell Smart’s shoe communicators that had come in contact with a pile of dog poop.

One of my motivations to write was to find ways to stop time, particularly in the hyperspace of adolescence, and tell my dad how much I loved him, how much I needed his words of validation. In my pre-teen and teen years, I wrote cards to him, with painstakingly chosen messages. It helped, especially since he wrote back cards to me, with sentences that never failed to reduce me to tears because they shone with such love and attention to the details of my concerns.

It was partly through my father’s writings that I was assured he was always thinking of me, crafting ways to guide me, even when he wasn’t talking out loud. They also showed me how much my dad preferred action over words. Dad was a doer, and the relationship we had over 47 years was less about chit chat or parental lecturing and more about playing basketball together, going to baseball games, and taking trips. So many trips to places like Chicago to see the grandparents, Philadelphia for father-son time, the Sierras for moments of hilarity with the Sussmans, Yosemite for one of many KJ adventures, Palm Desert with all the grandchildren, and Paris for a grown-up vacation with Franny – who, together with Dad, taught me so very much about love and partnership that I was able to find the most remarkable woman in Wendy. My God, there were so many vacations that he made happen so he could enjoy his loved ones without distractions.

Certainly, there were distractions, as there are in any life led in service to a community, that wedged between my dad and my efforts to get more words and attention from him. Often, when we were out at a supermarket together or a ballgame, he’d get approached by a patient who wanted to say hello to their favorite doctor. He was a bit of a celebrity, my dad, and I was known for 30-plus years as Dr. Keer’s son. It was a great coup for me one day when Dad called me up to tell me a student of mine came into the office and asked him, “Aren’t you Mr. Keer’s father?” Finally, I had turned the tables on him. And no one was prouder of it than Dad.

I wanted this speech to be funnier – Dad had such a great appreciation for humor  — as he showed me through the tapes of Johnny Carson clips with legendary comedians, the afternoons of watching Mel Brooks movies, and his own goofiness and willingness to be poked fun at for his follicle-y challenged head, his bird-like legs, and his woefully underprivileged sense of rhythm.

But, I’m not feeling easily humored right now. I’m just beginning to miss him. I’m floating in the fog of all the subtle ways he enhanced my life through little gestures and a consistency of presence that I often took for granted. For a father of such carefully selected words and a son who never seems to shut up, we had one particular trip that was emblematic of our entire journey together. It was a weekend stay in San Francisco two years ago to see the Dodgers play the Giants, to eat great food since we both like that kind of thing, and to just — be — together. Not talking so much, just being.

He was really good at just being.

One Response to Words for My Father