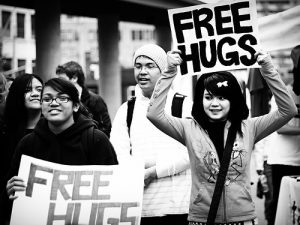 The soldier is someone’s child, a boy raised with lessons of love, the value of tolerance, and the benefits of friendship. Eight months into the soldier’s tour of duty, all those lessons are tested when two of his closest brothers in arms are out in a Humvee, driving through treacherous desert. Manning the turret is a hulking linebacker type who joined the military to protect his skinny high school buddy, who steers the vehicle. A bomb detonates, killing one soldier, knocking the skinny guy unconscious, and ripping off the arm of the linebacker. Bullets tear into the Hummer, awakening the skinny guy. Bleeding but determined to get his big friend to safety, the skinny guy guides the damaged Hummer back to base.

The soldier now stands before hundreds of students, not much younger than he was at the time of that fateful attack, telling his story.

“Aid was administered and both survived,” he says of his friends. It is then that the soldier pauses and tears come. “You see, real men cry.”

As he holds a hand to his face, he explains his deepest understanding of what they all fought for — to uphold a vision of the world that puts care for fellow human beings, regardless of race, creed, or color, above all else. Earlier in his presentation, he said that he had lost some of his Army friends and that “many of them were not the same race as me, or the same religion as me, or the same political ideology as me. But they died just the same. The strength of this country is and has always been in its diversity, and in its fearless inclusivity. If anything makes us exceptional it is this.”

The soldier has every reason to be cynical because of his trials, but his resolution is rooted so deeply that it binds a group of teenagers who struggle with their own doubts about life’s meaning. HIs resolution is so powerful that his tears return.

And it as this point that a student, a ninth-grade girl with a titanium leg in place of the one she was not born with, rises from her seat and steadily walks up to him. The soldier’s head is down, and he notices her just as she reaches out her arms and embraces him. He leans on this seemingly fragile girl with the strength to take him in and confirm that, yes, compassion and understanding balance out all that we lack.

When the soldier, who has let us all know that he is studying for a master’s degree with his opportunity to learn more about the world, finishes his speech, everyone rises, not just that brave girl. And everyone applauds him for his courage not only to risk his life for all, but his clarity in speaking up for something all too hard for many to see — that a world that is free and fair for everyone is worth fighting for.

As a teacher, I was privileged to hear the soldier’s message and the embracing girl’s pure show of support. I was also moved to become ever more resolved to drive home the message of freedom and equality so that my children will flourish and advocate others to be able to enjoy the same benefits.

This message has never been more crucial than in this new year, with a new presidential administration at the center of debate over how this country can move toward unity in the midst of intense disagreement and, at times, hate. Intolerance has reared its ugly head in many ways, more unfiltered than I have seen in my lifetime. It worries me, upsets me, and occasionally has me at a loss for how to move forward.

Yet, I feel compelled to find answers for my children and even for the students I teach. One answer is to get my family out of the house and travel the city, state, and country to see and meet people with backgrounds that differ from ours, in other environments. Another solution is to put as many books, TV programs, and films in front of them that show diverse perspectives. And it remains more vital than ever for me to encourage and fund as much formal education as my children can handle because knowledge really is the power we need more than ever.

These may seem obvious ideas, but they provide the experience and information children must have to understand others as well as themselves.

One more tack I resolve to focus on is to listen more intently to my children. They have viewpoints that will influence the future I hope to live in for at least a couple of decades. Judging by the audience that heard the soldier speak, many of today’s young people greatly value diversity and tolerance. They are better than most of us older folks at listening to opposing opinions, and unafraid of expressing their own. I have much to learn from them and must be willing to do so. After all, if I am doing anything right as a parent, they will be part of the generation to help this country come together more than I ever could.