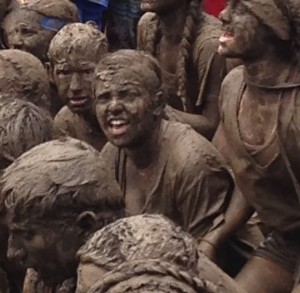 When it came to overnight camp, I was a dismal failure. Everyone else was having a good time, but all I ever seemed to do was embarrass myself by dropping food trays to thunderous applause, lying awake nights watching spiders make plans to eat me alive, and pining for girls who would never give me the time of day let alone make lanyards with me. I only went for a week each time, but those seven days seemed like months of torture.

So, when my wife told me we were sending our kids for a month when they got old enough, bitter memories flooded in.

“What if a mean boy steals all the cookies from their care packages?” I asked.

“That’s the first thing you worry about when it comes to sleep away camp?” my wife replied.

“Did you ever stand up to that bully?” she inquired.

“Actually…when he saw I was a decent basketball player, he asked to join my team later that week,” I answered, realizing the point my wife was about to make. “We had a few meals together, too.”

“And would that kind of bonding have happened without overnight camp?” she said.

Maybe I would have become friends with the cookie bully in another situation, but Wendy was right. Overnight camp provided opportunities to live and play with other kids, without much adult intervention, so that growth could happen in ways that just didn’t occur during regular year activities. Certainly not as quickly.

So, seven years go, my oldest son started going away to overnight camp. First it was for two weeks, then for a month. Jacob, my middle child, followed suit. Both of them usually came home caked in grime and resoundingly happy from their time away. They even returned with better table-clearing skills.

This summer, Benjamin (now 15) completed his final session as a camper while Jacob (11) reached the mid-point of his camp career and Ari (8½) accomplished his first two weeks away from us. All three of them had amazingly rich, albeit different, experiences.

In his swan song, Benjamin played the part of the senior camper who savored all the “last chances” to bond with buddies from all over the country, some of whom he only saw at camp. He went on the overnight-within-overnight camp – a week of sleeping under the stars and roughing it before returning to base like warriors from battle. Upon that return, Benjamin and his cohort covered themselves in wet dirt and gave “mud hugs” to the younger campers and some of the counselors. The biggest, muddiest embrace was for his brother.

Aside from unintended mud baths, Jacob availed himself to both sports and arts, particularly ceramics and the camp play. He’s the more extroverted of our two older kids and he grabbed every chance he could to befriend all kinds of campers, at varying age levels. We used to worry about our middle child, socially speaking, and coached him relentlessly on how to talk and play with people. So we really credit his overnight camp experience for allowing him the space to be himself, without us analyzing every move, and the results have been wonderfully positive.

For our youngest, we fretted about sending Ari at such a young age, but he was rarin’ to go, especially with this opportunity to be there with both of his big brothers.  Having learned a lot from the tales his siblings told, Ari was so comfortable at camp, he helped the other kids in his bunk make their beds and not feel so homesick. He even made sure to smile for pictures so his anxious parents could see proof on the camp web site that our boy wasn’t huddled somewhere in a corner, cursing our names.

With all three kids away from home, Wendy and I had nice days to be together, without having to make lunches, arranging for babysitters, or hounding our sons to do chores. We also spent a fair amount of time missing them because, frankly, we’ve come to feel fulfilled amidst the fruitful chaos of parenting.

What are most significant, though, are the long-term gains we all receive from overnight camp. For us, it’s the satisfaction that we have afforded our kids opportunities to practice independence in a safe environment, to take “technology vacations” that free them for more interactions with live people and nature, and to collect memories of great times and friendships. For them, it’s the chance to enjoy all of those benefits, without ever having to think that deeply about it. This, I know, is a whole lot more delicious than oatmeal raisin cookies.

One Response to Overnight Camp Sensations