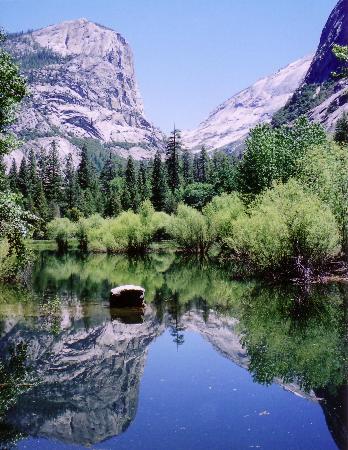 “Do I have to go? Nature’s overrated and hiking is boring.”

No, that was not one of my children, who complain about things just because we ask them to do it. This time, it was good ole city-boy me, moaning about Wendy’s suggestion that we head to the woods for a five-day excursion.

Sticking with her habit of ignoring my complaints, my wife scored a last-minute reservation at a lodge in an up-state national park. I had wanted anything else – a few days by the beach to doze or maybe a miracle European trip (hoping airfares would magically lower to 1970s prices). But Wendy, who works travel Web sites like a computer hacker, snagged this affordable trip to a land of dust, granite, and bad food.

When we announced our plans to the boys, they did something their father could not muster. They cheered and set about packing rugged clothes, flashlights, and survival food with the gusto of seasoned K2 climbers.

“Daddy, can I help you pack?” my middle son, Jacob (age 10), offered, sensing I needed a little push.

While it wasn’t enough to erase my internal resistance, seeing my kids rally to get on the road spurred me to ride the coattails of their enthusiasm. So I loaded up the iPod with music — a mix of songs the boys like and a bunch of Daddy’s R&B classics — dug out the neglected hiking shoes, and packed the SUV for adventure.

Less than seven driving hours later, we were in the park. Any remnants of grumpiness on my part were whisked away by the breeze wafting through our open windows. Tall pines, their tangy scent filling our senses, lined our route as we pulled over to make our first hike to an easily accessible but nonetheless impressive waterfall.

A little while later, we dropped our luggage in the dated yet comfy room and the kids rushed outside to play at a stream not more than 70 yards from our back door. Above us, mountains ringed the valley where we stood, replacing the office buildings we had in our recent memories.

“Look at the deer right in front of us!” Ari (7) announced as he scampered toward a pair of beautiful creatures munching on grass. With only one warning, as opposed to the six we usually have to shout to get him to comply, he stopped and stared at the deer as they enjoyed their late-afternoon snack.

Over the next few days, this national park vacation of ours – one that I had dreaded – climbed in my estimation. Every day, we combined fairly rigorous hiking with sitting by rivers and streams, taking in the endless natural curiosities around us. Little Ari made it up most of the mountain climbs, rarely objecting to the effort, and stalwartly dealing with wet clothes from the time he tripped into a pool of water.

A favorite trek was one I made with the two oldest boys. My frequently edgy teenager, Benjamin, was never so focused on a family effort as he was in leading us up a 2,425-foot climb. Feeling my age a bit, I relied on Benjamin and Jacob to inspire me up to the top, where we bore witness to a spectacular view. We took pictures and hugged each other, having conquered something bigger than just getting to school on time.

In our downtime, we sipped lemonades in the lodge while the kids read books about national parks. Truly fascinated, they never hesitated to teach us about the wildlife and geography they learned through the words on the page and the experience outdoors.

At the end of the stay, we stopped to see one last vestige of nature’s showmanship – a young bear scratching his butt on a fallen tree trunk. As the kids laughed, Benjamin, who seldom seems to enjoy time with his younger brothers and boring parents, suggested, “We should see a different national park every year.”

I’m certainly game to do this, because it confirmed what I sometimes forget. Kids are meant to play in nature. It calms them. It inspires them. The ground is meant to fall on, its earthy softness easy on young knees. The mountains and trees are meant to be scaled, rather than observed as pixilated images on video games. I owe more opportunities like this to my children.

In this month of our nation’s birthday, it’s fitting to praise “America’s best idea.” National parks are wonders worth beholding, whatever your camping aptitude is. They entertain as they teach and respect the average citizen’s budget. Although they need more financial support than ever, they do more for our children than we can ever repay. Most of all, they can turn cranky city dads like me into lovers of nature. Now that’s worth a proper salute.

One Response to National Treasures