Our October reviews begin with one nutty and wonderful project by Heidi Swedberg and the Sukey Jump Band. Led by the singing and ukelele-playing Swedberg, who made a comic name for herself as George Costanza’s Seinfeld fiancee, My Cup of Tea brims with whimsy and theatricality. Among the sparklers of the thirteen tracks are “The Owl and the Pussycat,” “Istanbul” (a reworking of the classic They Might Be Giants piece), and “Boogie Man.” Swedberg and her band are having so much fun making great music, it’s hard not to get caught up in it — and claim this is one of the year’s best musical surprises. 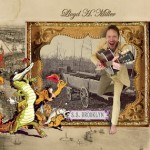 Already known as a kindie music innovator with the Deedle Deedle Dees, Lloyd H. Miller steps into the spotlight with S.S. Brooklyn. Marked by a stripped-down production, with the help of producer Dean Jones, to let Miller’s messages and musicianship breathe, the disc centers on the creativity and history of the New York borough of Brooklyn. In fact, this collection rises from the number of Sing Along With Lloyd performances Miller has done to support Brooklyn in the aftermath of Superstorm Sandy. Good intentions meet good performances on such tunes as “I’m Gonna Light Up the World,” “Working on a Bridge,” and “Big Trip.”

Smiley Face Sticker is the debut project of the witty wordsmith who calls himself Mr. Palindrome (real name: Natan Kuchar). Based in Australia and educated at the Berklee College of Music in Boston, Mr. Palindrome makes some nifty tunes out of a lot of nonsense through the title track and songs such as “Backwards Alphabet,” “Alove Alliteration,” and “Onomatopeia (On-O-Mat-A-Pee-Yah).” Listening and playing along with the verbal gymnastics should be great fun for parents and pre-school to early grade-school kids.

With its mission to inspire greater “physical health and overall well-being” in preschool-aged children, the Ohmies is a live stage show and a developing TV series from creators Laurie Miller and Ben Tollefson. Character-driven music from their show is now on record, produced by Tor Hyams, and includes the movement motivating “We’re the Ohmies,” “Wag Your Tail,” and “So Much Fun Together.”

Other discs notable for this rundown of children’s music reviews include new releases from prolific performers. One the groundbreakers of family music, Tom Chapin, delivers The Incredible Flexible You, a masterfully crafted project with songs aimed at helping children with the ins and outs of social interaction. And Chris Ballew, known to a legion of children and parents as Caspar Babypants, makes the Beatles catalogue his sandbox for Baby Beatles. Ballew is both faithful and playful as he reinvents this tunes for young ears.