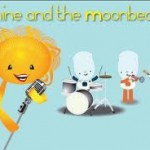 This edition of our children’s music reviews lifts off with the debut album from Shine and the Moonbeams. While my musical taste is eclectic, I tend to reach for R&B first, which is the foundation for this superb collection from leader Shawana Kemp and her band. The ensemble has been building buzz for a couple of years, following live and guest recording appearances (including the recent albums by the Pop Ups and Sugar Free Allstars), so the quality of this album is an example of potential fulfilled. From the Latin rhythms of “The Melody in Me” and the Hammond-organ infused “Imagination” to the ’70s soul sound of “Kilimanjaro” and the smooth ’80s feel of “High Five” (already getting airplay on satellite radio), there is no denying the quality of Kemp’s voice and the easy appeal of lyrics fit for the whole family. This is the retro-yet-new groove album of the summer. 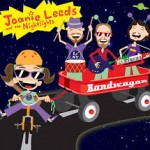 Joanie Leeds, with her band the Nightlights, rocks forward with her latest release, Bandwagon. Leeds and her group travel over all kinds of stylistic roads, such as the country of the title track, the garage-band sound of “Are We There Yet?” and the folk-rock of “Let’s Go.” Two other tracks of note are “Canon Song,” which spotlights guest vocalist Dean Jones, who also produced the album, and “Little Cloud,” with Rachel Loshak (of the Gustafer Yellowgold family) lending her voice. Then there’s “Nutritious,” a version of Stevie Wonder’s “Superstition,” which has all the markings of a kindie hit for its healthy lyrics on top of the classic melody. 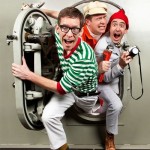 Summer is never happier than when it’s refreshed by a new Recess Monkey record. Deep Sea Diver surfaces with ocean-inspired songs, including the wacky “Fish Sticks” (about a percussive fish), the funky “Shrimp,” the sea-shanty “The Seven C’s” (one of the most lyrically clever of the collection with its references to a band of friends whose names all start with C), the beach mellow “Seagull,” and the Southern-rockin’ “Seahorse.” The Seattle trio, which features longtime members Jack Forman and Drew Holloway as well as new member Korum Bischoff, has a seemingly endless well of smart pop for young kids and this album certainly is worthy of their musical IQ. 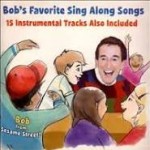 A special addition to our Father’s Day edition is Bob McGrath, a man who has been a father figure to millions via Sesame Street. His voice is as full of character and clarity as ever while he takes on 15 timeless tunes such as “If You’re Happy and You Know It,” “Wheels on the Bus,” and “Skinamarink” (one of my wife’s favorites). On Bob’s Favorite Sing Along Songs, the instrumentation  that goes with McGrath’s inimitable voice is so good that it warranted second versions of the tracks with just the instruments. The whole package makes for a terrific interactive experience with preschool age children. 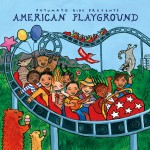 Finally, here’s a few really quick picks: Just ahead of the July 4th holiday is an apt soundtrack of sorts, American Playground, from the marvelous Putumayo Kids label. An all-stars-and-stripes cast of kindie rockers cover songs that reflect the richness of American musical traditions. Listen to artists such as Elizabeth Mitchell (“Keep on the Sunny Side”), Randy Kaplan (“Forever Young”), and Buck Howdy (“You Are My Sunshine”)….Boxtop Jenkins just won an Independent Music Award for his album “You’re Happier When You’re Happy,” a percolating melting pot of rock, bluegrass, and folk. Playing along with Boxtop (whose real name is Franklin Bunn) are special guests the Indigo Girls and Shawn Mullins…Mr. Saxophone’s new album I Sneeze in Threes is a pleasant surprise of a project from Dave Farver, a music educator from St. Louis who plays sax and guitar. Along with the pop catchiness of the title track are several parodies, including “Luke, I’m Your Father” (done to the tune of “Smoke on the Water”).