With a couple of extra days off this Thanksgiving break, take some extra time to listen to music with your kids. Try some classical music such as Mozart, Debussy, or Beethoven. Then sample the work mentioned in these children’s music reviews, which have a decidedly orchestral concentration.

Justin Roberts isn’t content with having risen to the heights of kindie rock stardom with hook-laden pop tunes. Now, he rises into the clouds of transcendent lullaby music full of poetic images and lush orchestration. Lullaby is an event-caliber album, featuring singers from the Chicago production of the musical Hairspray and members of the Chicago Symphony Orchestra (Roberts does indeed call Chicago home). On this lush recording, some of the more sparkling tracks are the gracefully imaginative “Count Them As They Go” the string-happy “Heart of Gold,” the Van Morrison-influenced “A Wild One,” and the timelessly gorgeous title song. 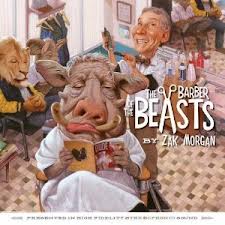 Wacky wordplay pairs with a wide-range of musical styles, including (you guessed it, orchestral) on Zak Morgan’s The Barber of the Beasts. Sporting elements of Shel Silverstein’s Where the Sidewalk Ends-style poetry, this album is a total blast to listen to and demands more than just casual sampling. At least once, sit down with your child(ren) and enjoy everything from the classically-inspired “Overture” and the title track to the growling rock of “Snow Day.” The CD booklet has vocabular guides for all the verbal fun going on in the lyrics.

The always adventurous world-traveling Putumayo Kids label delivers a new collection, World Sing-Along. Laden with inviting tunes such as Jorge Anaya’s dance-worth “La Cucaracha,” Father Goose’s island take on “Jig Jog Jee,” Frances England’s cozy interpretation of “That’s What Friends Are For,” and Dan Zanes and Anjelique Kidjo’s refreshing version of the Harry Belafonte classic “Jamaica Farewell.” A portion of the sales will be donated to a child-health cause, so the album will do double duty in this time of thanks-giving.