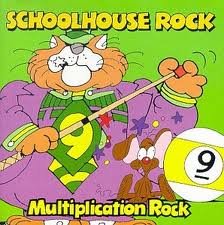 In third grade, I was a multiplication whiz. I had memorized most of the times tables with the help of Schoolhouse Rock’s clever cartoons such as “Three is the Magic Number” and “Naughty Number Nine.” I was driven by the candy rewards my teacher promised with each recitation of the correct sums.

From multiplication, I went to the world of percentages, particularly as they applied to baseball statistics. I huddled over box scores each morning with my cereal and could recite batting averages at random with my buddies as we compared baseball cards.

It all went downhill from there. By the time I reached middle school, I was a tangled mess of a mathematician. Algebra proved to be my biggest downfall. You know, the very basis of all advanced arithmetic.

In my first year of high school, I would sit with Mrs. Goldberg, a kindly, infinitely patient educator, and go through algebraic equations again and again. Almost every time we completed a problem, she’d stop to say, “Now, does that make sense?”

I’d sit there, sometimes more worried about disappointing her than myself, and reply, “No.”

She’d exhale slowly and ask, “What don’t you understand?”

The poor woman once snapped a pencil in two before collecting herself to try another approach.

Despite the extra help from teachers, tutors, my father – for whom math came quite easily and my struggles were a confounding mystery– I became a math disaster. My confidence was so shaken that, even if an occasional ray of light shone through in practice, I’d manage to muck things up on a test. I couldn’t so much as look at an equation or say the word “math” without feeling queasy. When I was placed in a remedial math class in 10th grade, my humiliation was complete. I felt like numerical dunce.

Try as I might to keep from transferring my issues to my children, some of this pain has reared its ugly head in my kids. Thankfully, my middle son has emerged from earlier struggles through a work ethic that makes mine pale in comparison. However, my eldest and youngest boys have been through the arithmetic ringer.

This past year, Benjamin (16) labored through a second semester of Algebra 2, nailing all of his homework assignments, yet suffering on his exams. Each time, he would go into the test feeling he knew the material, then, in the heat of the assessment, he would get stuck on a problem or two, puzzle them through backward and forwards, and invariably run out of time. His confidence dropped further with each test so much that he doubted his ability to do well even before he started. His math teacher gave him extra instruction, the department chair helped him during office hours, and we found a great peer tutor to aid with the final exam prep.

In the end, Benjamin passed the class, but not without feeling that math was a dark labyrinth that offered little daylight. This troubled me because I hated seeing my son slip down a slope of declining faith in his abilities and, worse, because I could offer no help other than commiseration.

For my nine-year-old, it’s hard to tell whether his math problems stemmed from the dislike of the challenge or from the challenge being too great for his developing brain. Just getting Ari to sit down to do calculations was like pulling on the leash of a dog that doesn’t want to go outside. When I did get Ari to approach a set of problems, he’d frequently get so tied up in knots that we splashed around countless puddles of tears (both his and mine).

From attempting to boost Benjamin’s confidence before tests to hand-holding Ari while he scribbled out answers, nothing helped pave my kids’ way to mathematical success.

I realize, after a summer of reflection, that my sons’ struggles are not necessarily mine. My genetics might have something to do with their math block, but it doesn’t mean I can be the one to fix it. In fact, the more I tried to fix it, the more I interfered in their individual process of getting out of the mess. All I saw was their pain and my need to alleviate it. As a result, we all finished the year feeling unsettled about the situation.

As the new school year begins, I intend to follow a different approach. My children’s battle with math is not a chance for me to rectify all that went wrong in my own number conundrums. Instead, I will be supportive from afar and let the fresh year, with different teachers, lead the way to hopefully a better experience for my kids. If they do struggle, so be it. I know of at least one person who made it to his 40s only being good at memorizing baseball stats.