The One That Ends With Hope 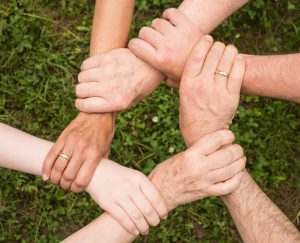 How’s this for a new picture book? It’s the story of two children who play on the same playground, learn in the same school, eat at the same restaurants. They each have caring parents. One morning, while out walking on a Saturday, one of the children sees the other walk into a synagogue with her family. The first child asks his parents if they can do the same.

“No, they are different from us,” the parents respond. ”Those are bad people. They make friends with bad people.”

The first child says, “No, she is my friend. She’s not bad.”

The parents shake their heads, “We are telling you they are. Do not play with her anymore.”

Years later, the first child has grown to his middle life. He has learned many reasons why the parents believe Jewish people are bad. Life has been hard for the once-little boy. Jobs have been hard to find. Others have jobs and seem happier. These others have different beliefs and backgrounds, but they all live near him. Some of them are Jews. His parents have died, so he has looked for guidance from others who believe as his parents taught him. These others have power and tell him the ones who have what he should have should be removed from his neighborhood.

One day, a Saturday, the man goes to a synagogue. A little girl has just entered with her parents. The man follows, pulls out a large gun, the kind that shoots many bullets very fast, and shoots everyone he can.

When he is done. And people are dead or screaming in pain, he peers to his right and sees the little girl, still alive. She lays next to her parents, now dead. She looks back at him in fear and confusion.

The man meets her eyes. He feels…

He feels…what? As I write, I do not know what to fill in there to complete the sentence. Does he feel good, bad, a combination? Now that he has done what he has done, does he feel better, worse, proud, horrified?

But as I write these words, I write to ease the sickness I feel. To make room for a way forward so that I can protect my children and help steer the parents of anyone who will read these words towards something better.

It is easy to hate. It is hard to love. It is easy to find reasons to push others aside and even kill them. It is hard to bring others close to us and even hug them, help them. But which provides something that lasts, something to build from? We must keep asking ourselves long-term questions, not giving ourselves short-term answers. The long ones provide hard roads toward life, understanding, and love. The short ones, those that sometimes look like little pieces of metal that shred and kill, provide paths of death, ignorance, and hate.